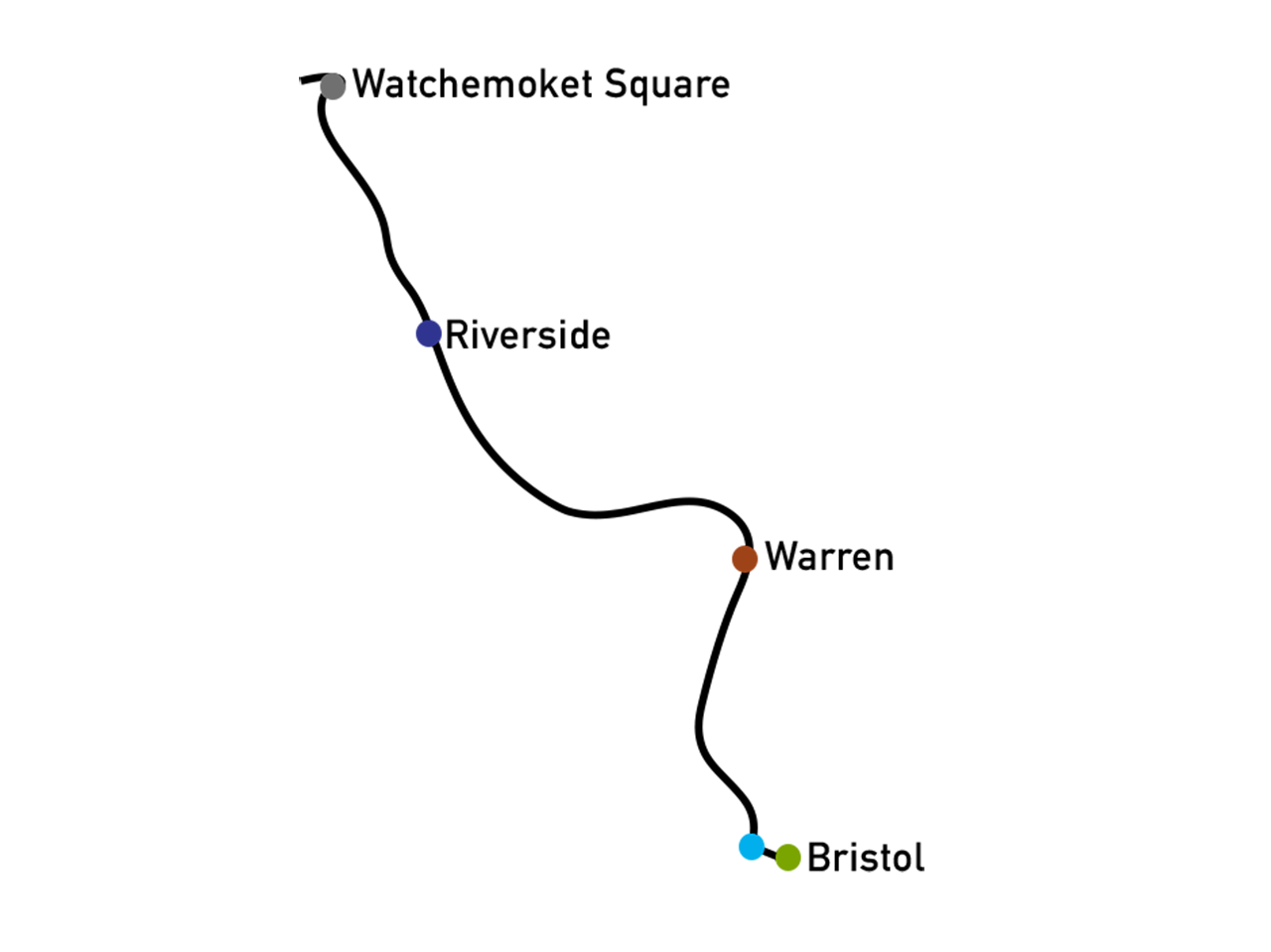 Did you know there are several Public Projects along the East Bay Bike Path? Since biking a good form of socially-distant exercise, we wanted to let you know where they are so you can take a ride and see them for yourself!

If you’re leaving from Providence, take a breather in this little East Providence sculpture park right after you cross the Linear Park bridge. Before you get there though, while you’re still on Linear Park, take a peek over the edge to get a unique vantage point on the sculptures!

You can lock your bike up to one of our geometric bike hitches, then meander through the beautifully landscaped lot to look at some sculptures as well as some native marsh plantings. This park was created with the vision of our wonderful partners, the East Providence Arts Council. The first sculpture, “Rigging”, was designed and fabricated by Julia Sullivan and Alex Wynne in 2016. It’s a large, abstract stainless steel piece based off of the rigging of a ship. This is more apparent from the birds-eye view provided by Linear Park.  The second sculpture, made is 2018, is a mixed metals representation of a marsh bird, created by Michelle Raccone.

While Borealis has limited hours, you can still take a seat and have a snack on this awesome boat-themed bench designed by Kris Brown right next to the bike path in Riverside. There are a couple of sail-inspired bike racks right there to lock up to, and a matching buoy-esque trashcan so you can responsibly throw away your trash!

Now that you’ve got about 10 miles under your belt, you may want to take this opportunity to lock up your bike and stretch those legs. Back in 2007, we made a lot of bike racks out of recycled, large chains, as well as trash and recycling cans (so hold on to any recyclables till you get here!). Have a stroll through town with your mask on, and see if you can find something new!

Bonus points if you want to explore a little further- we have bike racks at the Town Beach, and Jamiels Park as well!

Where to start with Bristol? We’ve been working with our partners in Bristol for over 10 years! We’ve outfitted Hope Street and Independence Park with classy nautical amenities, including trash and recycling cans, bike racks, benches, and planters. At the end of the bike path, you can take a stroll through Independence Park, but then head up a block from Thames Street to Hope Street to look at all the cool small businesses there.

If you’re feeling adventurous, keep heading East from Hope Street until you hit Wood Street, where we made artistic fencing for Bristol Industrial Park, as well as “medallions” for their street lamps, bike racks, and where we premiered our side-opening combination trash/recycling cans.